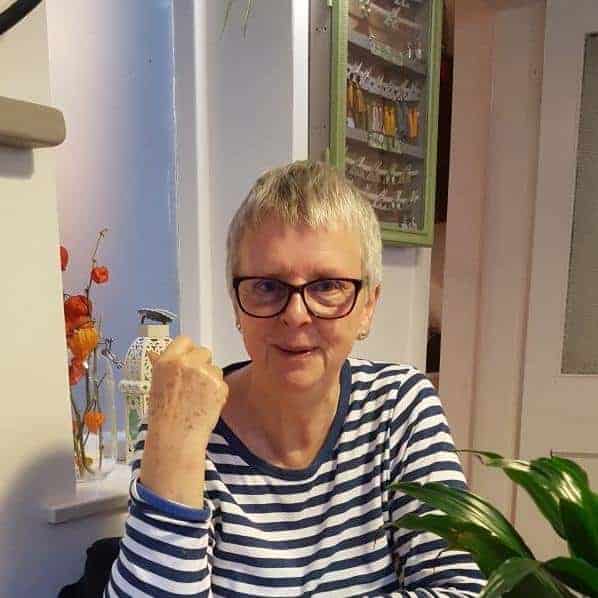 My Recovery:
Here goes, I’ll try to give you the full story!

My first experience of ME/CFS symptoms were when I was pregnant about 44 years ago. I could hardly crawl out of my bed during the early months. This settled down and I became a fully functioning expectant mum at around the 4th month. I hadn’t a clue what had happened and neither had my GP. Now I recognise it as ME/CFS. Previously I had tonsillitis followed immediately by cystitis both of which my GP treated with penicillin. So followed an allergic reaction to that.

That was the start of my ups and downs health-wise over the next few decades. I had major surgery and repeated minor surgery, mainly for gynaecological troubles. But in between times I was pretty well able to live normally as a single parent and as a teacher.

I also had a few traumatic experiences, including the death of my older son.

After many years of working all hours, never being able to relax, such were the pressures I felt were on me, I became ill repeatedly with what I thought was flu. Finally in November 2000 I conked out completely and was unable to function due to the severity of the ME/CFS symptoms. My GP diagnosed it correctly and told me I would never recover completely but may improve slightly after a time.

We hunted for a treatment which would help me, but any medications we tried (‘we’ being my GP and myself) increased the levels of all the symptoms.

So I tried to live inside my not very comfortable zone. I existed.

A friend gave me some deep relaxation CDs, which did help.

So when I found the Gupta programme in 2010 I leapt at it (figuratively speaking, obviously.) The whole theory made so much sense to me as for years before I conked out I’d had adrenaline withdrawal symptoms at the beginning of holidays. I knew I’d been living off adrenaline but couldn’t see how to stop…until Gupta.

Within a couple of weeks I knew I would get better. Within a year I thought I was fully well, apart from not sleeping. I used the Accelerator on that, and all’s been well since. Since then I have continued to get even better so I can’t have been 100% when I thought I was! I am still improving steadily. Recently I realised that I am now able to listen to music, and smells and various chemicals which were a no go zone are now OK. I can read today’s newspaper if I want to without reacting to the fresh ink!

Today I woke up, went through my daily routine: 20 minutes meditation, shower, exercises, breakfast; an hour’s dog walking; a 10 minute sit down with peppermint tea and a book; drive into town to visit my 87 year old neighbour in a care home; back home for lunch; soften and flow; an hour’s dog walk followed by delivering Christmas cards; a 10 minute sit down. Then onto this!

There are variations in this, sometimes I do a lot of housework or gardening, but the gist is there.

I still have mild fibromyalgia, but can live with it as I consider the pain is only a message to my brain that there’s something amiss. As I already know what’s amiss I just tell my brain ‘not to bother, it’s an old problem and not worth reacting to.’ That usually eases the pain to a level I can ignore, or even better the pain goes.

My Gupta routine is 2 lots of 20 minute mediation, 1 soften and flow, and 1 stop stop stop dance each day (that’s so I don’t forget it!)

I use the various techniques as and when I need them. Today I turned what would previously have been a recurring negative thought about someone’s attitude to me from yesterday into something which made me laugh. She’s called Agnes, and I remembered the welsh call of Uggy Uggy Uggy, Oi Oi Oi etc and changed it to Aggy Aggy Aggy Oi Oi Oi. This stopped me from feeling the need to phone her and puy my point of view to her, which wouldn’t have helped at all.

So, I now feel at least 10 years younger than my 69, and probably 40 years younger than when I was so ill. The friends I lost are well gone, who needs them? I have some lovely friends and keep meeting and making more. I am calmer than I ever was, serene in fact, and with the techniques to prevent slipping back into damaging ways.

I will always thank Ashok for not only giving me my life back, but for a new and better life. If I can give a teeny weeny bit back by helping others I am glad.