Explanation of Your Condition - The Gupta Program
Skip to content

Explanation of Your Condition

I’m excited to share with you my explanation of these conditions, which I call "Neuro-Immune Conditioned Syndromes (NICS)." I have spent the last twenty years researching and refining this explanation. It is based on my medical paper which was published in a peer-reviewed medical journal in 2002.

The paper was first published online in 2000. Normally this therapy was only available to a relatively small number of patients that I am able to see at my clinic, but now everyone in the world can experience its powerful effects. 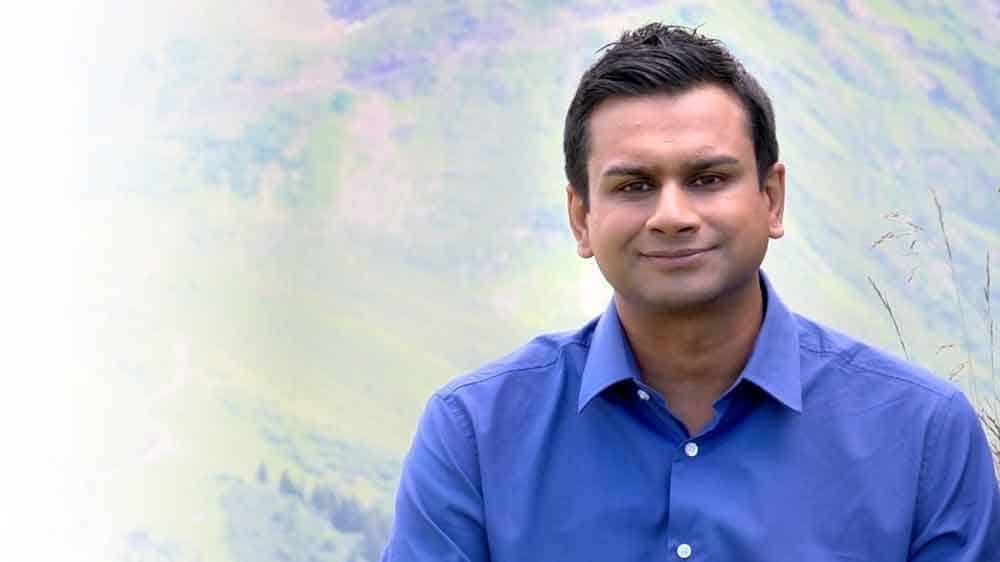 I Suffered From Chronic Fatigue Syndrome (ME/CFS) Myself. Around 20 Years Ago, I Developed It While Studying At University.

Since then, I have dedicated my life to finding an effective treatment for ME/CFS and associated conditions such as Fibromyalgia, Multiple Chemical Sensitivities, IBS, Burnout, etc. I have been completely well for many years, and I successfully treat patients globally.

To help you understand the process that I believe has helped me and many others to improve, I will look at:

An overview of The Amygdala & Insula Hypothesis a ‘vicious cycle’ that, once triggered by severe stressors in people with certain risk factors can perpetuate neurological overstimulation, physiological dysfunction, and many physical symptoms.

An explanation of major symptoms in the context of this hypothesis.

A brief summary of Amygdala & Insula Retraining (AIR) concepts – how patients may break the vicious cycle by applying techniques that encourage the amygdala, insula, prefrontal cortex and associated brain structures to discontinue the hypothesized overstimulation.

You can also sign up for the 28 Day trial below and watch Session 3, which goes through the hypothesis in detail.

Be supported every step of the way through this expertly designed neuroplasticity and holistic health course that is backed by science and encourages pacing, relaxation & self-care as its top priorities!

My Amygdala and Insula Hypothesis

My medical research seems to indicate that these conditions are neurological in nature, and may be caused by abnormalities in a brain structure called the ‘amygdala,’ and the ‘insula’.

One of the amygdala’s roles is to protect the body from potential threats.

This hypothesis serves as a potential unifying model for the various observations in patients. I published my hypothesis in the peer-reviewed journal Medical Hypotheses in 2002. 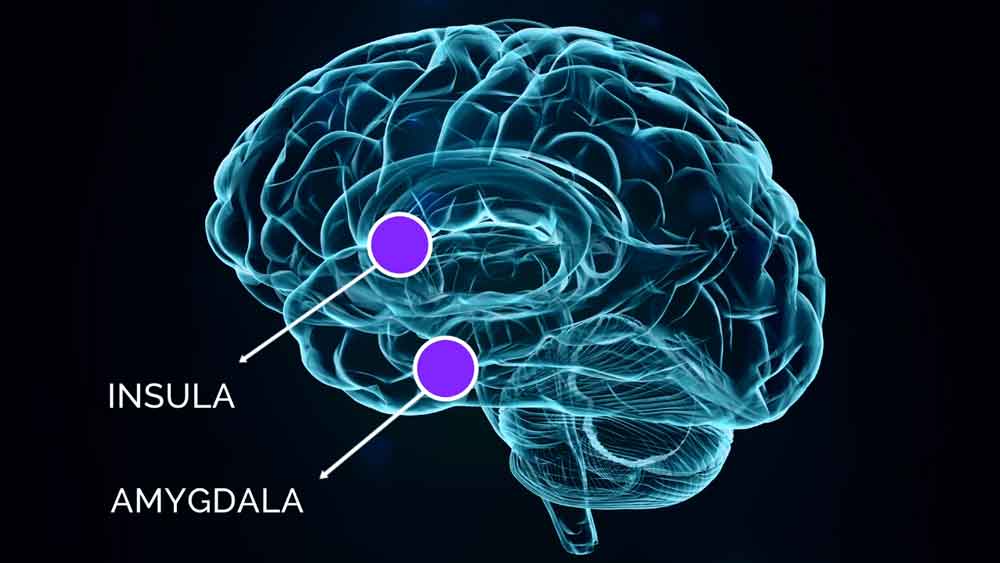 A Basic Explanation of the Medical Paper (in Layman’s Terms)

Right at the top, let’s start with the predisposing factors to developing these illnesses – i.e., the risk factors. These may include genetic factors and environmental factors yet to be fully determined.

Then there are two other precipitating factors which contribute to these illnesses developing in someone.

The start of the illness is often accompanied by psychological or physical stress, as well as some kind of acute physical illness. 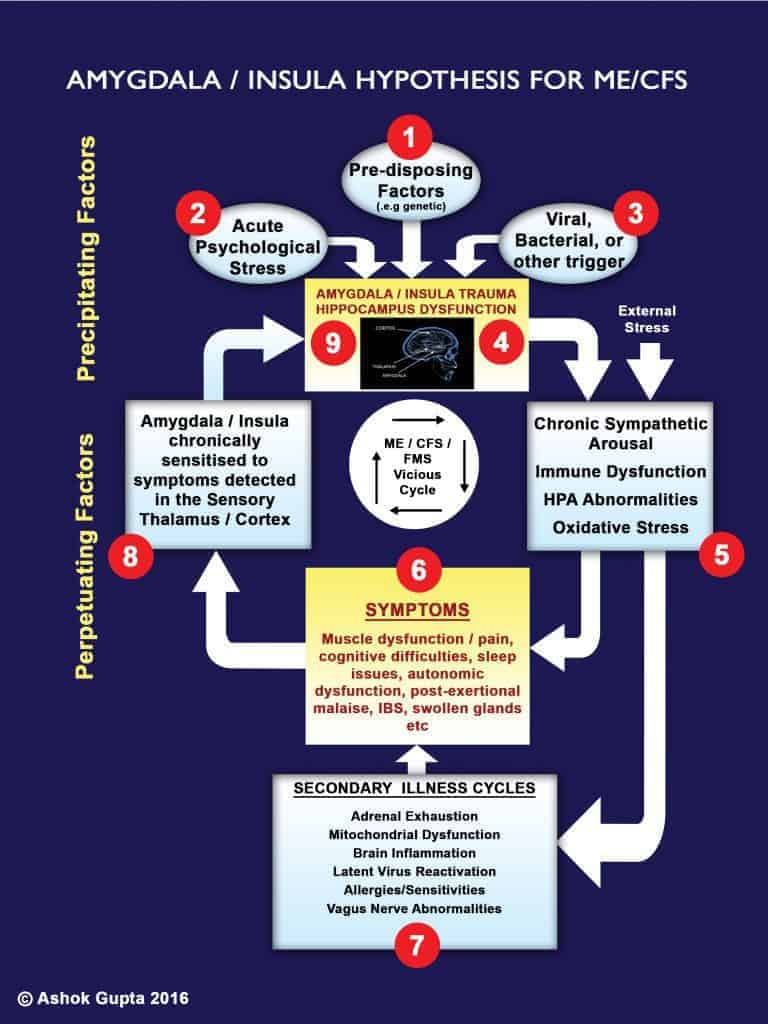 There will be crossovers in symptoms between these conditions, according to the theory. The theory predicts that the pattern of symptoms in the body will be different, but that the underlying cause may be the same. The theory still holds if there is a gradual onset versus a specific onset (see medical paper for further details.)

Gulf War Syndrome may represent a combination of all three illnesses to varying degrees, as at the time there was exposure to immunizations, toxins, and physiological stresses all at the same time.

Conditioning In The Amygdala and Insula

The combination of these precipitating factors changes the circuitry of the amygdala and the insula, making it continually over-stimulate the body (4).

2. This conditioning happens unconsciously without a person actually realizing it is happening.

Chronic Stimulation of the Arousal System

From then on, the amygdala and insula continually over-stimulates the sympathetic nervous system directly (5).

1) It over-stimulates the hypothalamus and the whole HPA (Hypothalamic-Pituitary-Adrenal) Axis, which subsequently downgrades as a result, making it difficult for the body to respond to stress.

2) The amygdala also over-stimulates the whole brain, keeping many brain circuits in a state of hyper-arousal. This adversely affects the levels of neurotransmitters in the brain, including serotonin and dopamine.

4) Finally, this over-stimulation causes higher levels of oxidative stress in the body, and a compromised immune system.

A continual unremitting stimulation can cause symptoms which can severely affect every single organ and system in the body, including the endocrine (hormonal) system, and the immune system.

Furthermore, continual stimulation can cause secondary effects in the body, which then lead researchers to think that those physical observations are the cause of the condition, whereas they are simply symptoms of a deeper underlying brain abnormality.

Hyper-arousal of the body then causes the symptoms (6) and creates Secondary Illness Cycles (7).

Over-stimulation can cause adaptation in receptors so that systems are down-regulated, or certain systems may simply exhaust due to over-stimulation, as is the case with the adrenal glands. Nitric oxide levels may rise (as per the observations of Professor Martin Pall), which can cause a whole host of secondary effects and symptoms in the body, including mitochondria dysfunction, perpetuating the entire vicious circle. Because the immune system is responding inappropriately, opportunistic viruses such as HHV-6 have the opportunity to flourish, increasing symptoms.

Finally, at (7), secondary illnesses such as allergies and chemical sensitivities can occur due to the hypersensitivity of the entire system.

Sympathetic over-activity means that sleep rhythms are affected, so the restorative “delta” sleep required for bodily repair is not effective. This has also been shown in Post Traumatic Stress Disorder, an illness where the amygdala has also been heavily implicated. This causes a patient to feel unrefreshed the next morning, causing severe exhaustion, and contributing to pain in fibromyalgia.

These symptoms are detected by the sensory thalamus/cortex and the insula cortex – the parts of the brain that receive incoming information from the senses (8).

And to complete the cycle, incoming signals are magnified by the amygdala, which keeps the brain and nervous system in a state of hyper arousal (9).

* The insula may be involved in interpreting the emotional meaning of the symptoms, and passing that representation on to the amygdala. The Insula also retriggers aspects of the immune system due to the inappropriate conditioning

* At 9, the amygdala is traumatized by any symptoms that it detects in the body, and instantly re-stimulates bodily systems at 4 again.

Note that this central nervous system sensitivity (and resultant abnormal sensory processing causing heightened pain awareness) is gradually becoming a more accepted hypothetical model in fibromyalgia. This then perpetuates into the vicious circle as in the diagram.

If the circle becomes particularly vicious, a patient can become bed-bound. If the cycle is milder, the patient may be able to function to a varying degree. The symptoms in each patient will depend on three factors:

1) The severity of the conditioning effects in the amygdala, insula, and associated brain structures.

2) The specificity of the conditioning; that is, what symptoms and what reactions were going on in the body at the time of the original trauma.

3) The specific timing of the trauma  although symptoms can change over time.

Due to the secondary effects of the condition on the body, food intolerances can develop, as well as general sensitivities. This is because when the brain and body are on high alert, the amygdala (in association with other brain structures) is prone to learning new responses to stimuli it would not normally care about.

When the sympathetic system is aroused, digestive and detoxification systems are turned down or switched off, which may explain why many patients complain of feeling “toxic” inside.

A patient will also find that stress can exacerbate the symptoms – simply because it “speeds up” the vicious circle, and the body does not have sufficient resources to deal with that stress. The stress can be mental, emotional or physical.

How The Symptoms of These Conditions Are Created

Learn more the range of physical, cognitive and emotional symptoms that those with ME/CFS, fibromyalgia, and associated illnesses may experience – explaining how they may be products of amygdala hyper-sensitization.

The Basic Concepts of Retraining The Amygdala and Insula

I wish to emphasize that I believe ME/CFS, fibromyalgia and MCS are real physical conditions, and are in no way psychological. The sensitivity conditioning mainly occurs unconsciously.

Currently, I do not believe that there are any pharmaceuticals which could target such a specific reaction in the brain. Most pharmaceuticals or supplements target the symptoms rather than the underlying cause. If the conditioning effects are mild, successful treatment of symptoms may bring full recovery, but in the majority of cases, this will probably not occur.

The unconscious brain reaction involved in amygdala and insula dysfunction is not normally under a patient’s control, but I believe that some novel “brain retraining” techniques derived from NLP (Neuro-Linguistic Programming), breathing, meditation techniques, and others, can target the reaction and control the amygdala. The techniques are highly specialized, and do not fit under any one category, which is why I refer to them as “Amygdala & Insula Retraining.”

Luckily the amygdala and insula constantly communicates with other parts of the brain, and that’s where retraining can take place.

In animal models, it is understood that the amygdala can be controlled with new neurons being formed, connecting from the pre-frontal cortex to the amygdala/insula, to subdue and control its reactions. Also strengthening the ability of the insula and anterior cingulate to regulate and inhibit reactivity in the brain (the ‘inhibition mechanisms’)

Be supported every step of the way through this expertly designed neuroplasticity and holistic health course that is backed by science and encourages pacing, relaxation & self-care as its top priorities!